This article was originally posted by Pro Trade Craft and has been lightly edited. 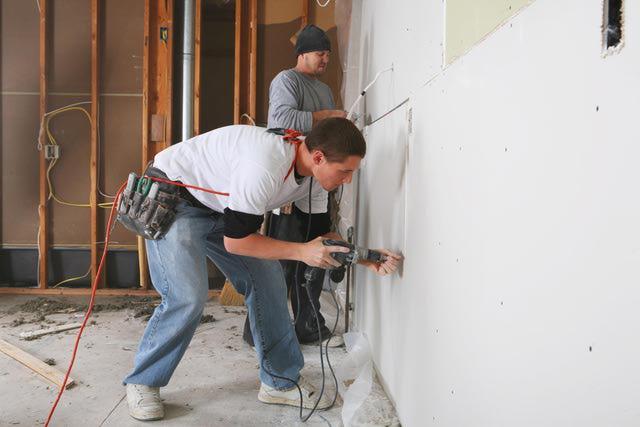 While drywall and insulation contractors might be best equipped to install drywall, homeowners may wish to try a hand at it themselves. In either case, properly installing drywall can air seal as well as insulate a home, making it more energy efficient and comfortable.

With blower door tests required to measure air tightness now in the building code, it is up to more than just insulators and general contractors to deliver results: many trades have a stake.

Turns out, it’s not so hard for a homeowner or drywall contractor to become involved in improving building performance. Because drywall makes a great air barrier, all you have to do is improve how it is installed to significantly boost airtightness, which increases the efficiency of a home.

It all begins with big holes in the wall like electrical outlets which connect the living space to the wall cavity.

Seal the holes in work boxes

Use either low expansion foam or specialty products like the airtight box pictured in the video. Seal the foam box to the stud and then lay a bead of caulk on the perimeter face to seal against the back of the drywall.

Stack effect occurs when warm air inside of a house rises up and escapes out through holes in the building envelope and is replaced by an equal amount of cooler air from outside that enters through the bottom of a house. A bead of sealant around the perimeter of the can light will help prevent more air leakage than necessary, but an airtight box over the fixture can do even more. You can create this box with either drywall or rigid foam.

Another big source of leaks is the actual wall framing

In general, if you glue the drywall to the studs, you'll plug a lot of holes. Glue should extend plate to plate and on each stud.

Run a bead of adhesive along the gap between the king stud and the trimmer stud and make sure that all beads intersect around the window and also at the top, bottom, and corners.

There is an eight-foot gap along each edge of the stud, making a 16-foot crack in the wall. The best way to deal with this crack, though, is to not create it in the first place. Avoid creating this crack by gapping the wall framing off the exterior wall and run drywall continuously throughout. The next best thing is to seal the gaps in the framing at the plates and to float the corners to reduce cracks.

Above the walls are more hidden gaps

Wherever the ceiling meets the wall is a spot open to air leaks. You can seal it with canned foam, caulk, or acoustical sealant, depending on the size of the gap.

While air sealing a home is important, you should also note that a home can be considered “too tight” without a proper mechanical ventilation system in place. Mechanical ventilation refers to the process of actively supplying air to and removing air from areas inside a house. Because the house is a system, changing one aspect of the home affects everything else. Therefore, if you seal up all the holes in the building envelope yet do not have good airflow through mechanical ventilation, you could cause mold, poor air exchange and serious building science issues. Keep this in mind when tightening up your home!